Skip to content
Home Technology News Android 13: Try these features on your phone as soon as you upgrade

Google today officially launched Android 13, bringing in tons of new features and improving existing ones. Google has ensured that the operating system works well even on big screens, something the company has struggled with for a while now. That said, here’s a quick look at some of the features you might have missed on.

The icons adapt according to the wallpaper tint and overall system theme.

Building on Google’s Material You guidelines, Android 13 lets users control how the operating system looks. The latest from Google supports themed app icons which means they will change their colour according to wallpaper tint and overall theme preferences.

In earlier versions of Android, users had to manually disable notifications from a particular app. But with the introduction of the notification runtime permission in Android 13, apps will have to ask users if they can show notifications.

If you are someone who uses Bluetooth audio devices a lot, you will be pleased to know that Android 13 now supports Bluetooth Low Energy audio. This enables users to listen to High Fidelity audio without draining the device battery and stream audio to multiple devices without loss in audio quality. 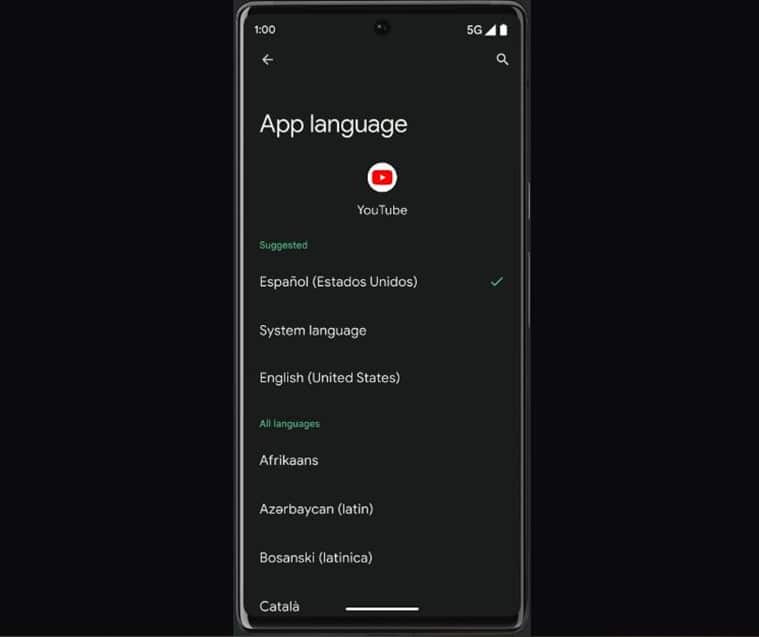 Here’s how the app language settings panel looks like.

Starting with Android 13, users can set a language for every app without changing the system language. For apps that support multiple languages, users can switch between supported languages from the ‘App language’ settings panel.

If you use an app that comes with a custom tile, Android 13 now lets users add the tile to the quick settings panel without the need to leave the app.

Android 13 now notifies users if a particular app is draining the battery in the background. Users will see a silent notification that lets them kill the app causing battery drain with a single tap or swipe it away to keep it running.

With the release of Android 12L, Google optimised how Android looked on large screens. Android 13 builds on the previous iteration and features an enhanced taskbar much like the dock found on Mac devices which lets users easily switch between multiple apps.

The taskbar enhances multitasking capabilities on a large screen.

8. Connect to devices without location permission

Android 13 introduces new permission called NEARBY_WIFI_DEVICES that lets the operating system scan for nearby devices without the need to enable location. This is really handy if you want to send and receive files or communicate with other devices without revealing your location.

For years now, Google has been improving clipboard management. Starting with Android 13, users will see a small floating panel at the bottom of the screen that shows and lets you edit the contents of the clipboard. Also, the clipboard will automatically clear up after some time, which is really handy if you often copy sensitive information such as email addresses and passwords.

Android 13 features a quick settings tile that can be used to quickly scan QR codes no matter which app you are in. It can also be accessed from the lock screen, which means you no longer need to launch Google Lens or the camera app.

If you are looking to upgrade your existing 4G phone or looking to buy a new 5G phone, now is a great time to consider the same…

Apple deals: This year, both Amazon and Flipkart are offering huge discounts on several Apple products. Here, we will take a look at the best deals on…

The Amazon Great Indian Festival sale is just around the corner, and that makes it one of the best times throughout the year to buy new tech….

iPhone 13 at its lowest-ever price on Amazon India: Check details

The iPhone 13 is a year old at this point, but given it isn’t very different from the newer iPhone 14, the yesteryear smartphone is starting to…