When Apple announced that it would acquire Shazam in 2017, analysts and trade pundits were stunned by Cupertino’s interest in the popular song-identification app. Although Shazam already boasted 120 million active users and over a billion app downloads, its loyal user base and recurring revenue paved the way for Apple to acquire the music-recognition service for a reported $400 million. Years after acquiring the service, Shazam has been natively integrated into iOS. That’s right – you don’t have to download the app separately on your iPhone. With Shazam recently turning 20, we thought of introducing you to the service and how you can instantly identify a song with the iPhone’s built-in music recognition feature.

Founded in 1999, Shazam introduced something that was unique to the platform: song recognition. When you hear a song playing in the background, launch Shazam and it instantly recognises it for you. The idea behind Shazam is simple: let the user identifies a song and then stream that song – be it on Spotify or Apple Music or download it from the iTunes store.

Despite Apple acquiring Shazam, the app is still available on Android as well as iOS. And if you don’t have the Shazam app on your iPhone, worry not. Apple debuted Music Recognition as a built-in iOS feature in 2020 with iOS 14.2. What we like about this feature is that it keeps track of songs identified with the Music Recognition feature across devices sharing the same Apple ID. You can also sync your Shazam and Apple Music app and create a playlist of Shazam’d songs that have been identified over time from various Apple devices. 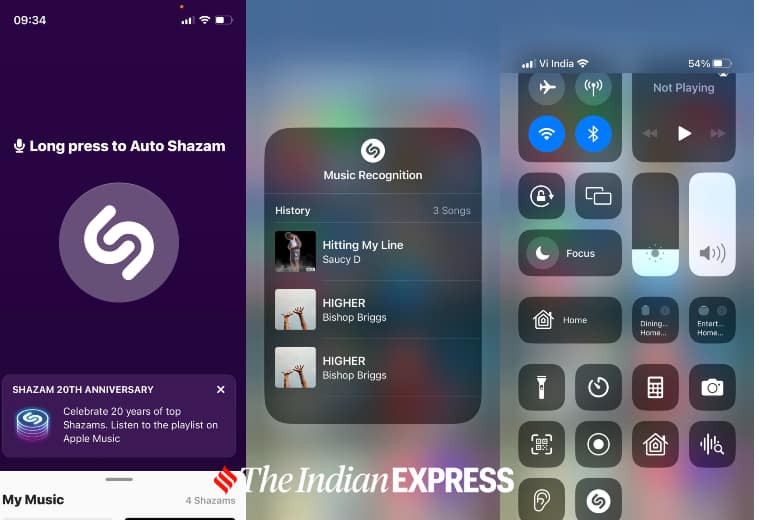 It’s easy to use Shazam on your iPhone. (Image credit: Anuj Bhatia/Indian Express)

How to use Music Recognition on your iPhone

# First, make sure you are running the latest version of iOS on your iPhone. To do that, go to Settings > General > Software update. You need to be on iOS 14.2 or newer.

#Update the iPhone to the newest version of iOS.

It’s time to recognise the music

If you have newer iPhones with FaceID, all you need to pull down the Control Center shade by swiping down from the top-right of the phone and tapping the Shazam icon. For older iPhones, just swipe down the bottom of the screen to access the menu and find the icon.

Now, whenever you hear a song on the radio, hit the Shazam icon and the Music Recognition feature in iOS recognises the song. A banner will pop up at the top of your screen showing the song’s name, the artist, and a thumbnail image of the album. That’s it.

Note: Mind you, like Siri, Shazam can’t recognise a tune that you sing

If you are looking to upgrade your existing 4G phone or looking to buy a new 5G phone, now is a great time to consider the same…

Apple deals: This year, both Amazon and Flipkart are offering huge discounts on several Apple products. Here, we will take a look at the best deals on…

The Amazon Great Indian Festival sale is just around the corner, and that makes it one of the best times throughout the year to buy new tech….

iPhone 13 at its lowest-ever price on Amazon India: Check details

The iPhone 13 is a year old at this point, but given it isn’t very different from the newer iPhone 14, the yesteryear smartphone is starting to…